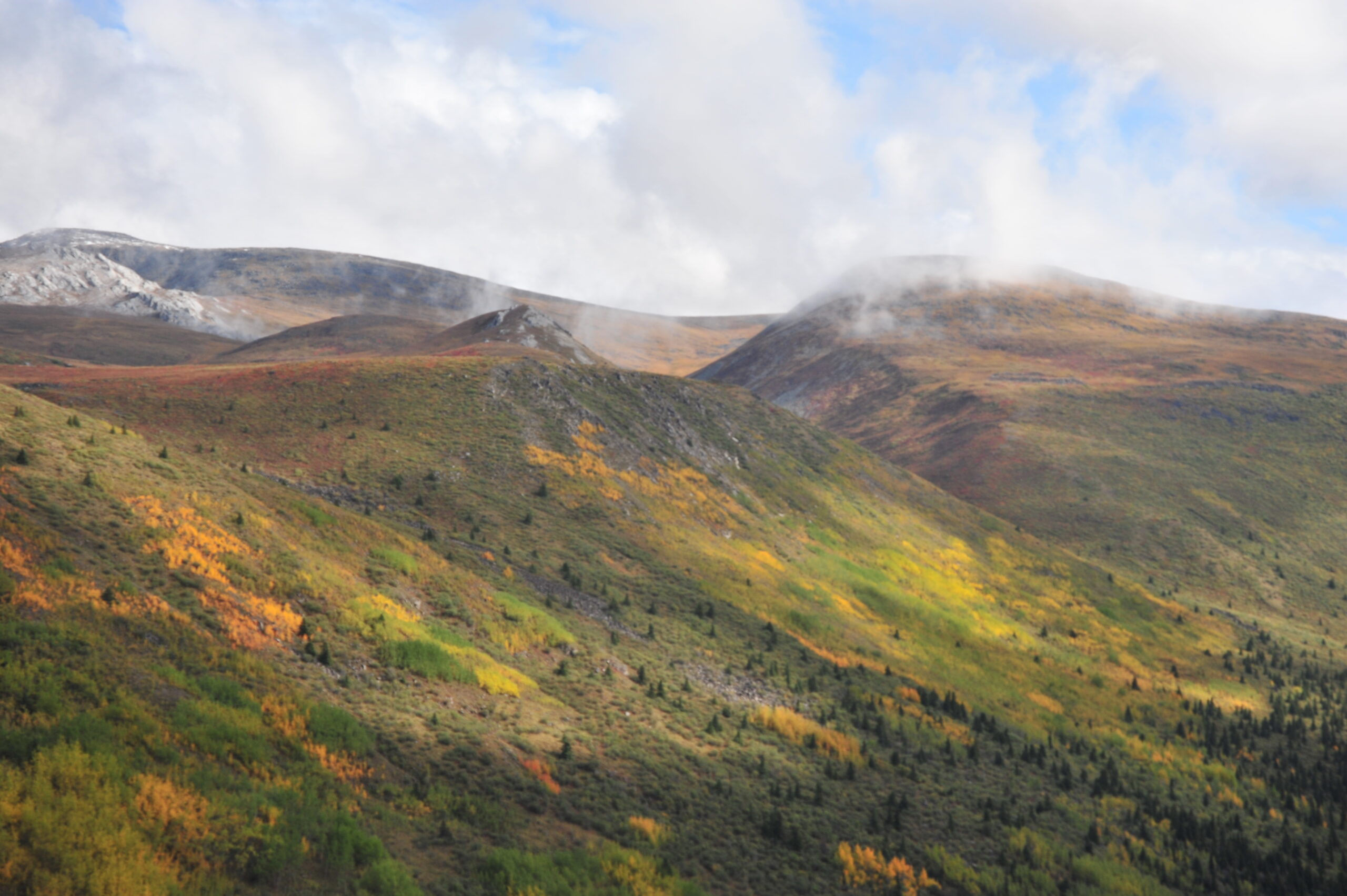 Vancouver, B.C., October 12, 2022: SNOWLINE GOLD CORP. (CSE: SGD) (OTCQB: SNWGF) (the “Company” or “Snowline”) is pleased to announce additional preliminary* assay results from its 2022 drilling program at the Valley Zone, Rogue Project, Yukon. Hole V-22-010 intersected a broad zone of sheeted quartz vein mineralization within the Valley intrusion averaging 2.55 g/t Au over 318.8 m from bedrock surface at 3.0 m downhole (Tables 1 and 2). The hole was collared more than 165 m from any previously announced hole, and it expands to the southeast the known width of the zone of high vein densities within the Valley intrusion (Figures 1 and 2).

“In the context of our initial 2022 drill assays from V-22-005 and V-22-007, these latest results highlight a continuity of mineralization at Valley that we were hoping to see, with grades exceeding our expectations,” said Scott Berdahl, CEO & Director of Snowline. “The results change once again the way we think about the Valley gold system, and they continue to challenge conventional perceptions of reduced-intrusion related gold systems in general. We eagerly await the many forthcoming analytical results from our 2022 drill programs at Valley and Gracie, along with those from our very active surface exploration season across Snowline’s Yukon portfolio.”

Hole V-22-010 was collared in the Valley intrusion, 180 m west of hole V-22-007 (282.9 m @ 2.30 g/t Au including 146.0 m @ 3.24 g/t Au, see Snowline news release dated August 24, 2022). Similar to hole V-22-007, V-22-010 encountered a polyphase granodiorite to diorite intrusion, with multiple generations of gold-bearing quartz veins present in the drill core. The hole is notable not only for its high vein densities but also for the relative abundance of trace, fine grained (sub millimeter scale) grains of visible gold, with over 120 instances of gold grains observed along the length of the hole. Gold is commonly associated with bismuthinite and telluride minerals in sheeted to near stockwork quartz veins. Overall sulphide content of the system is very low.

In recognition of the potential significance of its drill discovery at Valley, the Company has initiated environmental baseline monitoring in the vicinity of the project. As of early October 2022, 11 water quality monitoring stations have been established for monthly sampling by an independent third-party environmental firm, alongside 5 hydrometric stations to measure stream flow levels within and around the Valley intrusion. These measurements will complement weather and precipitation monitoring, alongside both planned and completed wildlife, botanical and archaeological surveys, to provide baseline environmental data for future progression of the project.

The Company has also engaged a metallurgical consultant for an initial evaluation of mineralization at Rogue through gravity, leaching and communition tests. Early identification of potential gold recovery processes will help to de-risk the project while guiding further drilling and future economic studies to optimize exploration and potential development at Valley and other targets on the property.

Three drill rigs will be wintered on site to allow for an early, rapid, and cost-effective start to the next phase of exploration at Rogue.

The geological setting and style of mineralization at Rogue’s Valley Zone indicate the presence of a bulk tonnage gold target, with similarities to Kinross’s Fort Knox Mine in Alaska and Victoria Gold’s Eagle Mine in the Yukon. Gold is associated with bismuthinite and telluride minerals hosted in sheeted quartz vein arrays along the margins of a mid-Cretaceous aged Mayo-series intrusion. The Rogue Project hosts multiple intrusions of similar age and affinity to that at Valley along with widespread gold anomalism in stream sediment, soil and rock samples. The project is thus considered by the Company to have district-scale potential for reduced-intrusion related gold systems.

Valley is an early-stage exploration project without a resource estimate, and the presence or absence of an economically viable orebody cannot be determined until significant additional work is completed. At writing, 91% of analytical results from the 2022 drill campaign (13,182 m of 14,495 m, comprising 11,030 m of 12,343 m at Valley and 2,152 m of 2,152 m at Gracie) remain outstanding.

Vein densities presented herein refer to the number of quartz veins apparent in a meter of core, where a single quartz vein may range in thickness from millimetres to tens of centimetres. Such densities are used by the Company, alongside presence/absence of visible gold and bismuthinite, and average thickness of quartz veins, as a general indicator of gold potential to guide exploration. They should not be interpreted as a direct analogue to assay results. Additionally, the level of detail as currently logged varies between holes, with density values for certain holes currently averaged across intervals of tens of metres, whereas densities for other holes are split out at the metre scale. Angle of veins relative to core can also severely affect observed density, as a hole drilled parallel to the orientation of sheeted quartz veins will show a low vein density (e.g. V-22-033 in Figure 1), whereas a hole drilled perpendicular to veins in the same material will show a higher vein density. Finally, different vein arrays, and even different regions within a laterally extensive vein array, may have variable gold content. For interpretation and significance of any hole, the Company cautions that assay results are required.

On receipt from the drill site, Valley’s NQ2-sized drill core was systematically logged for geological attributes, photographed and sampled at Snowline’s 2022 field camp. Sample lengths as small as 0.5 m were used to isolate features of interest, otherwise a default 1.5 m downhole sample length was used. Core was cut in half lengthwise along a pre-determined line, with one half (same half, consistently) collected for analysis and one half stored as a record. Standard reference materials, blanks and duplicate samples were inserted by Snowline personnel at regular intervals into the sample stream. Bagged samples were sealed with security tags to ensure integrity during transport. They were delivered by expeditor and by Snowline personnel to ALS Laboratories’ preparatory facility in Whitehorse, Yukon, with analyses completed in Vancouver.

ALS is accredited to ISO 17025:2005 UKAS ref 4028 for its laboratory analysis. Samples were crushed by ALS to >70% passing below 2 mm and split using a riffle splitter. 250 g splits were pulverized to >85% passing below 75 microns. A four-acid digest with an inductively coupled plasma mass spectroscopy (ICP-MS) finish was used for 48-element analysis on 0.25 g sample pulps (ALS code: ME-MS61L). All samples were analysed for gold content by fire assay with an atomic absorption spectroscopy (AAS) finish on 30 g samples (ALS code: Au-AA23). Any sample returning >10 g/t Au was reanalysed by fire assay with a gravimetric finish on a 30 g sample (ALS code: Au-GRA21).

The entirety of hole V-22-010 will undergo screen reject analysis to determine whether the screening process could introduce a sampling bias in current results by excluding coarse gold from analysis, resulting in an under-reporting of true grades. Other biases are also possible.

As noted, results reported herein are considered preliminary following receipt of a low percentage of abnormal assays from standard and blank samples inserted by the Company into the Valley sample stream. (Standard samples are prepared by a third-party laboratory to have known quantities of gold, and blank samples are known to contain very limited concentrations of gold.) In total, 3 of 43 reference samples fell outside of acceptable limits. Reanalysis of samples run along with these reference materials will provide greater certainty in the final assay numbers. These results will be reported if a material difference is identified between the current assays and the re-run sample batches. Based on the widespread and consistent mineralization throughout V-22-010, however, the Company does not believe that the re-analysis of this relatively small number of samples will have a significant impact on the preliminary mineralized intervals reported herein.

Snowline Gold Corp. is a Yukon Territory focused gold exploration company with a seventeen-project portfolio covering >254,000 ha. The Company is exploring its flagship >111,000 ha Einarson and Rogue gold projects in the highly prospective yet underexplored Selwyn Basin. Snowline’s project portfolio sits within the prolific Tintina Gold Province, host to multiple million-ounce-plus gold mines and deposits including Kinross’ Fort Knox mine, Newmont’s Coffee deposit, and Victoria Gold’s Eagle Mine. The Company’s first-mover land position and extensive database provide a unique opportunity for investors to be part of multiple discoveries and the creation of a new gold district.

*These results are considered preliminary as 3 out of 43 of the Company’s QA/QC insertions of blanks and standard reference materials into hole V-22-010 returned values of outside of acceptable limits. This is not an unusual nor necessarily unexpected failure rate. In response, five samples on either side of failed insertions will be reanalysed along with the insertions themselves. Given the scale and general consistency of the gold mineralization across the holes where insertions did pass QA/QC screening, the Company deems these preliminary results to be strongly indicative of overall grade and thus material information. Final assay results may be updated in a future release. For more information, see the QA/QC section of this release.