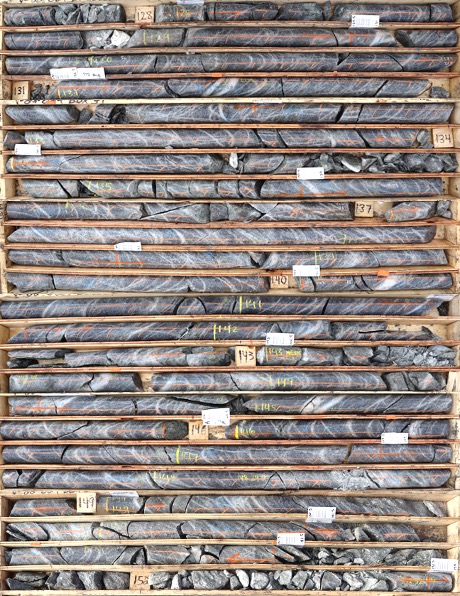 Vancouver, B.C., September 20, 2022: SNOWLINE GOLD CORP. (CSE: SGD) (OTCQB: SNWGF) (the “Company” or “Snowline”) is pleased to announce it has doubled its Selwyn Basin mineral tenure holdings to roughly 254,000 ha through targeted staking and an acquisition agreement for a large portfolio of Yukon Territory exploration assets from StrikePoint Gold Inc. (TSXV: SKP) (“StrikePoint”), an arm’s length party. The acquired properties and certain blocks of the newly staked claims are considered by the Company to be prospective for reduced-intrusion related gold systems (“RIRGS”) similar to its Valley Zone.

“Our drill discoveries provide strong proof-of-concept for the gold potential of this part of the Selwyn Basin, particularly for reduced-intrusion related gold systems like Valley,” said Scott Berdahl, CEO & Director of Snowline. “Our recent staking and the acquisition of the Yukon exploration property portfolio from StrikePoint Gold add significantly to our exploration pipeline. While our primary focus remains on our flagship Rogue and Einarson discoveries, these expansions add great depth to Snowline’s exploration pipeline, giving shareholders the potential to participate in multiple future discoveries of this type.”

The Company has entered into an agreement with StrikePoint, whereby the Company will acquire 4,713 mineral claims from StrikePoint in exchange for (i) the payment of $500,000 in cash (the “Cash Consideration”), and (ii) the issuance of 500,000 common shares (the “Consideration Shares”) of the Company (the “Acquisition”).

The StrikePoint properties cover various geological targets prospective for gold. Most notably, the “Golden Oly” project covers a series of mid-Cretaceous aged felsic intrusions prospective for RIRGS mineralization. Limited historical work by previous operators encountered sheeted quartz vein arrays and surface grab samples of up to 19.2 g/t Au. These results have not yet been directly verified by the Company. Accompanying the mineral properties themselves is a historical exploration database including surface sampling (soil and rock) and extensive aerial magnetic data, providing the groundwork for planned initial exploration programs on these projects by Snowline.

The Acquisition remains subject to acceptance by the Canadian Securities Exchange (the “CSE”) and various closing conditions which are standard for such transactions.

In addition to the Acquisition, the Company has significantly expanded its Rogue, Einarson, Ursa, Rainbow and Cynthia projects through staking (Figure 1). Newly acquired areas were identified by the Snowline team as having elevated potential to host gold deposits based on geological, geochemical and geophysical information and based on the Company’s evolving understanding of rocks and mineralization in this area through its surface and drill campaigns.

Drilling is ongoing at Valley, with 9,919 m drilled on the target so far this season for 10,718 m total drilled on the target to date. Assays for more than 22 holes drilled at Valley in 2022 remain pending, including assays for the bottom 31% of V-22-007. In total, this represents roughly 8,991 m of drilling (and counting), or 91% of the current season’s results from the Valley Zone still to be reported.

At Gracie, trace instances of fine visible gold have been observed in bismuthinite bearing quartz veins in 4 of 5 holes. A total of 2,152 m has been drilled at Gracie, though drilling has yet to encounter the buried intrusion responsible for mineralization. Assays are pending for all holes at Gracie.

The geological setting and style of mineralization at Rogue’s Valley Zone indicate the presence of a bulk tonnage gold target, with similarities to Kinross’s Fort Knox Mine in Alaska and Victoria Gold’s Eagle Mine in the Yukon. Gold is associated with bismuthinite and telluride minerals hosted in sheeted quartz vein arrays along the margins of a mid-Cretaceous aged Mayo-series intrusion. The Rogue Project hosts multiple intrusions of similar age and affinity to that at Valley along with widespread gold anomalism in stream sediment, soil and rock samples. The project is thus considered by the Company to have district-scale prospectivity for reduced-intrusion related gold systems.

Valley is an early-stage exploration project without a mineral resource estimate, and the presence or absence of an economically viable orebody cannot be determined until significant additional work is completed.

Snowline Gold Corp. is a Yukon Territory focused gold exploration company with a seventeen-project portfolio covering >254,000 ha. The Company is exploring its flagship >111,000 ha Einarson and Rogue gold projects in the highly prospective yet underexplored Selwyn Basin. Snowline’s project portfolio sits within the prolific Tintina Gold Province, host to multiple million-ounce-plus gold mines and deposits including Kinross’ Fort Knox mine, Newmont’s Coffee deposit, and Victoria Gold’s Eagle Mine. The Company’s first-mover land position and extensive database provide a unique opportunity for investors to be part of multiple discoveries and the creation of a new gold district.

Information in this release has been prepared under supervision of and approved by J. Scott Berdahl, M.Sc., P. Geo., CEO and Director for Snowline and a Qualified Person for the purposes of National Instrument 43-101.

This news release contains certain forward-looking statements, including statements regarding the completion of the Acquisition, including CSE acceptance, payment of the Cash Consideration and the issuance of the Consideration Shares, newly staked targets being considered by the Company to be prospective for RIRGS and/or gold, the potential to participate in multiple future discoveries, newly acquired areas having elevated potential to host gold deposits, the Rogue project having district-scale prospectivity, the creation of a new gold district and the Company’s future plans and intentions. Wherever possible, words such as “may”, “will”, “should”, “could”, “expect”, “plan”, “intend”, “anticipate”, “believe”, “estimate”, “predict” or “potential” or the negative or other variations of these words, or similar words or phrases, have been used to identify these forward-looking statements. These statements reflect management’s current beliefs and are based on information currently available to management as at the date hereof.