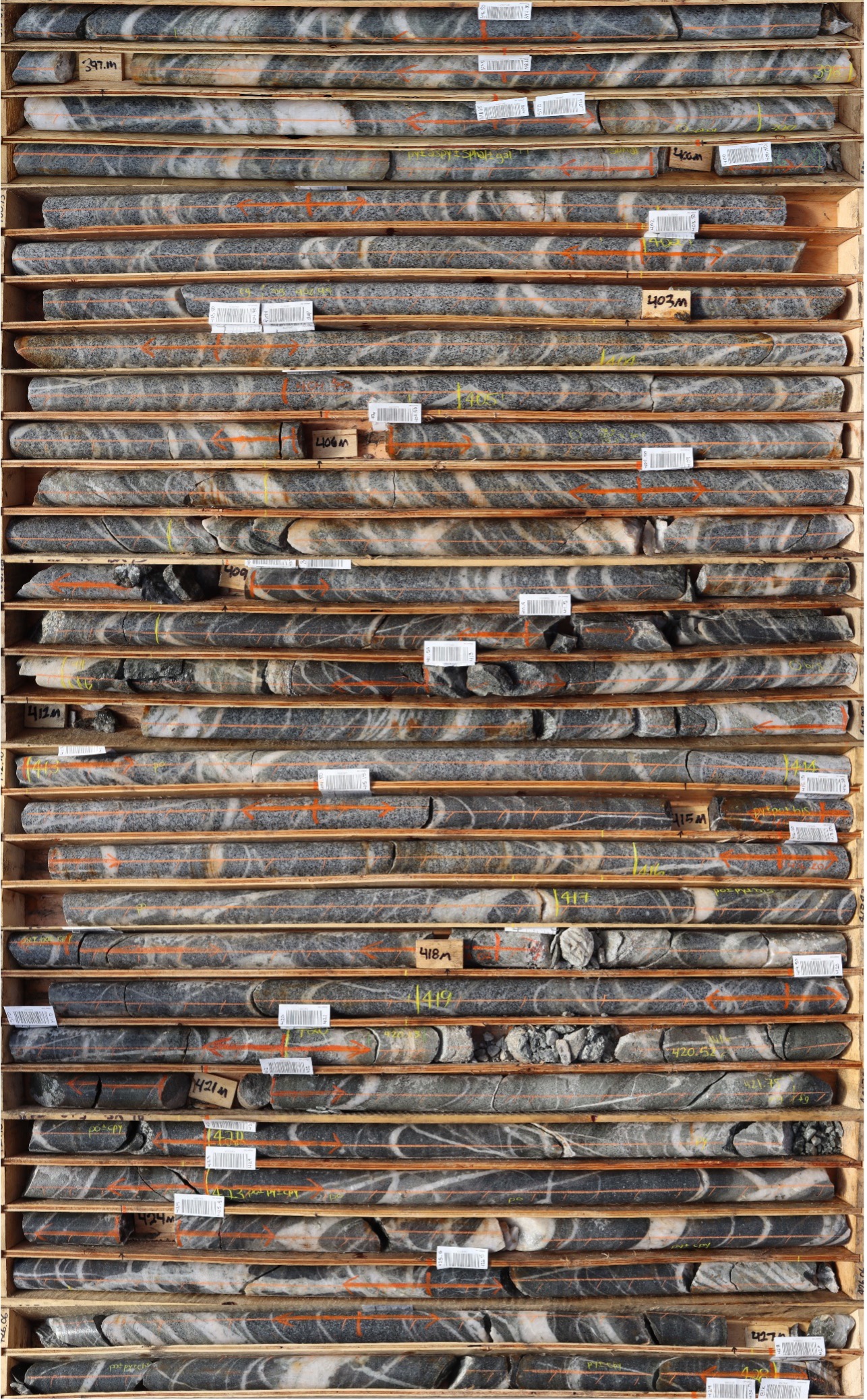 Vancouver, B.C., August, 3 2022: SNOWLINE GOLD CORP. (CSE: SGD) (OTCQB: SNWGF) (the “Company” or “Snowline”) is pleased to announce that it has encountered gold bearing quartz vein mineralization in multiple large step-out holes at its Rogue project’s Valley Zone in Canada’s Yukon Territory (Figure 1). Characteristic sheeted veins are present at various intensities across the roughly 800 m width of the intrusion and extending into the surrounding hornfelsed rocks, and along 700 m of strike length tested to date. Of note is a corridor of high vein densities (commonly >15 veins/m) up to 300 m wide intersected across 600 m of strike length and open along strike, with robust mineralization intersected at 430 m below surface and open to further depth.

“We are very encouraged by the scale of the mineralized system we are seeing at Valley,” said Scott Berdahl, CEO & Director of Snowline. “Each successful step-out across hundreds of metres adds significantly to the bulk-tonnage potential of the target, and mineralization is present from surface to the bottoms of the deepest holes we’ve drilled to date—to 554 m downhole corresponding to 430 m below surface. Of course, we won’t know the true significance of the discovery until we have drill core assays back. Lab estimates now point to mid-August for return of our first holes of the 2022 exploration season.”

High quartz vein densities previously reported in holes V-22-005 and V-22-007 appear to form part of a well-mineralized corridor cutting NW-SE through the Valley intrusion. Drilling to date suggests a true width to this zone of up to 300 m where tested. The length of the system is open, and runs roughly 600 m from V-22-005 in the NW to V-22-012 in the southeast. Similarly, mineralization remains open at depth; holes V-22-014 and V-22-015 intersect the zone at surface and to as deep as 430 m below surface, respectively, with moderate to high vein densities continuing to depth (Figure 2). Hole V-22-010 tested the eastern boundary of the corridor, with 120 instances of trace, sub-millimeter scale visible gold observed along the length of the 404 m hole during logging and after cutting (Figure 3).

Holes V-22-013 and V-22-017 continue to build out the overall extent of known mineralization within the Valley intrusion, complementing the low to moderate densities of sheeted vein arrays seen in V-22-006 and in the bottom of V-22-008, and demonstrating the (open) length of the system across roughly 700 m to date. Vein densities in these holes are generally comparable and locally in excess to those encountered in 2021 drilling near the northwest edge of the intrusion, where intercepts of up to 1.25 g/t Au over 168.7 m were encountered. The 2021 holes crosscut both hornfelsed metasedimentary rocks and intrusive rocks. It remains to be seen whether similar vein densities in different host rock types (e.g. entirely in the intrusion) can be expected to carry similar grades within this system.

The local width of the intrusion along the section including V-22-007 and V-22-015 is roughly 800 m, with low to locally moderate (5-15 veins/m) densities of quartz veins continuing into the surrounding hornfelsed metasedimentary rocks. To the southeast, recently collected airborne magnetic data suggests the potential presence of a continuation of the Valley intrusion, or alternatively a smaller secondary stock hidden beneath cover.

Assays for all holes drilled to date in 2022 are pending, and drilling of additional holes at Valley is ongoing. The Company finds these visual results to be encouraging, and it cautions that the significance of the observations reported herein will not be known until assays are received and reviewed. Vein densities are a primary factor in determining grade, but other factors including typical vein thickness, individual vein grades (including presence of visible gold), host rock type and relative location within the hydrothermal fluid system can influence overall gold grade. Valley is an early-stage exploration project without a resource estimate, and the presence or absence of an economically viable orebody cannot be determined until significant additional work is completed.

A third helicopter-portable drill has mobilized to the Valley Zone. The drills and the geological team are working in tandem to continue building out the scale of known mineralization at Valley.

One drill is slated to move to the Gracie Zone, some 4 km east of Valley, where an intrusion thought to be related to Valley is present below surface. Aerial magnetic work and mapping have identified multiple structural corridors, including a sheeted join/vein array in hornfels sediment that parallels a dominant mineralization orientation at the Valley Zone. This Phase I program will be the first-ever drill testing of the Gracie Zone.

The geological setting and style of mineralization at Rogue’s Valley Zone indicate the presence of a bulk tonnage gold target, with similarities to Kinross’s Fort Knox Mine in Alaska and Victoria Gold’s Eagle Mine in the Yukon. An 800 m Phase I drill program conducted at Valley in September 2021 encountered broad zones of gold mineralization in all four holes drilled (see Snowline news release dated February 10, 2022). Gold is associated with bismuthinite and telluride minerals hosted in sheeted quartz vein arrays along the margins of a mid-Cretaceous aged Mayo-series intrusion.

Snowline Gold Corp. is a Yukon Territory focused gold exploration company with a seven-project portfolio covering >127,000 ha. The Company is exploring its flagship >85,000 ha Einarson and Rogue gold projects in the highly prospective yet underexplored Selwyn Basin. Snowline’s project portfolio sits within the prolific Tintina Gold Province, host to multiple million-ounce-plus gold mines and deposits including Kinross’ Fort Knox mine, Newmont’s Coffee deposit, and Victoria Gold’s Eagle Mine. The Company’s first-mover land position and extensive database provide a unique opportunity for investors to be part of multiple discoveries and the creation of a new gold district.

This news release contains certain forward-looking statements, including statements about the Company’s upcoming drill program, implied significance of visual inspection of drill core, outcomes of mineral tenure ownership resolution, and surface work and plans for exploring and expanding a new greenfield, district-scale gold system. Wherever possible, words such as “may”, “will”, “should”, “could”, “expect”, “plan”, “intend”, “anticipate”, “believe”, “estimate”, “predict” or “potential” or the negative or other variations of these words, or similar words or phrases, have been used to identify these forward-looking statements. These statements reflect management’s current beliefs and are based on information currently available to management as at the date hereof.